“In a car you’re always in a compartment, and because you’re used to it you don’t realize that through that car window everything you see is just more TV. You’re a passive observer and it is all moving by you boringly in a frame.

On a cycle the frame is gone. You’re completely in contact with it all. You’re in the scene, not just watching it anymore, and the sense of presence is overwhelming.” ― Robert M. Pirsig, Zen and the Art of Motorcycle Maintenance.

Hanle, a remote village in the Ladakh Himalayas, less than 20 km from the Line of Actual control (LAC), was the last leg on our motorbike road trip to Ladakh. Hanle valley in Changthang is a high altitude cold desert that receives scanty or no rainfall due to lying in the rain-shadow area of the mountains.

To reach a place as isolated in the Himalayas on motorbikes requires a heart full of courage and a spirit of adventure, other than a map of course, or you could end up in China!

Getting there: Accessible on road from Mood, Hanle requires a permit to visit that can be obtained from Leh.

Changthang plateau is a part of the Tibetan plateau, the highest plateau in the world that extends from China into Ladakh. Home to the Changpa, pastoral nomads who raise goats & yaks, it is dry & cold with mostly cloudless skies. To reach a place as isolated in the Himalayas on motorbikes requires a heart full of courage and a spirit of adventure, other than a map of course or you could end up in China! Crossing some of the highest mountains passes in the world on broken, sometimes non-existing roads or mere dirt tracks to lead the way; it’s a challenging bone-chilling ride, but as with any place in Ladakh, it’s the journey not the destination that matters. (Read about Breathless Himalayas: Crossing Chang La)

From Tangtse near Pangong Tso to Chushul the landscape changes from hard rocky mountains to smoother mound-like hills in various hues. This road runs parallel to Lake Pangong across Kangju Kangri Mountain in the Pangong range. The tar road turns into a dirt track after the Army checkpoint at Parma. After a bowl of delicious thukpa at a dhaba in Chushul as we headed to Mood, we were advised to strictly follow the dirt tracks and take a right in case of confusion, NOT a left turn as the Chinese border was just 10-15 km away! This stretch of the dirt road goes on for kilometers in the vast flat plateau surrounded by mountains on both sides and as the valley widens the tracks going in all directions get confusing. We had to ride slow as the bikes were skidding on the sand and loose gravel. Following the electric poles it was only after we saw the Indian flag at Rezang La from a distance, we realized we weren’t lost!

We were advised to strictly follow the dirt tracks and take a right in case of confusion, NOT a left turn as the Chinese border was just 10-15 km away!

Rezang La pass in Chushul valley is more than 2.5 km long & 1.5 km wide, at an altitude of 17,000 feet. On the pass there is Rezang La War memorial dedicated to the Indian soldiers who fought the India-China war in 1962. Read More. Another memorial from the same year stands at the easternmost town of India, Walong in Arunachal Pradesh.

The dirt road continues till a few km from the Army checkpoint at Mood, surrounded by mountains of various hues and a stark black road it’s a surreal Mars-like landscape all the way to Hanle.

Hanle boasts of housing India’s Chandra telescope and a 17th century Buddhist monastery of the Drukpa lineage. Located on a hilltop the monastery looks more like a fort but the view of the valley from the monastery is gorgeous!

Sitting by the edge of the broken wall of the monastery, two men repair the wall. In such remoteness taking a break from fixing the wall, it would be a pleasure to see someone drive by that lonely road! 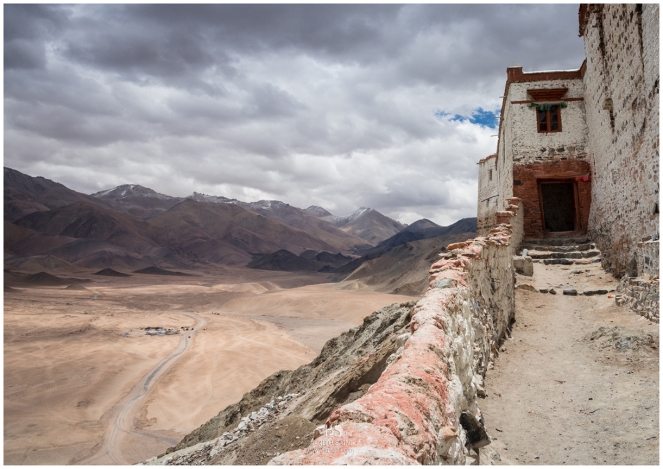 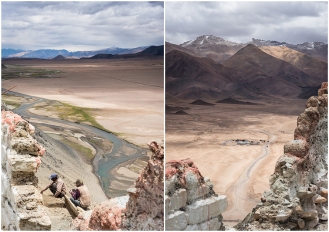 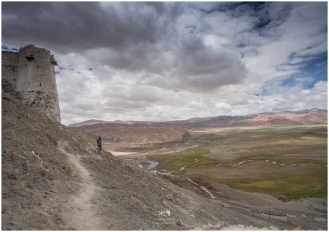 Hanle valley from the Monastery

Walking around the monastery one of the monks invited us for a cup of tea. Sipping hot chai and nibbling on glucose biscuits as we chatted he told us, with the new road its easier to visit Hanle now, and he was happy to meet those who make it this far. 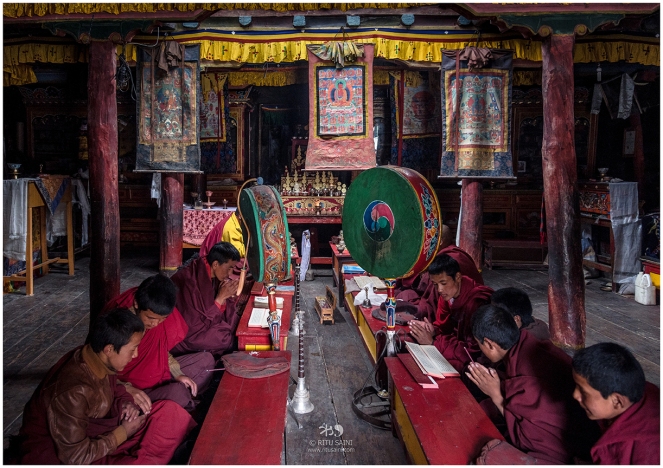 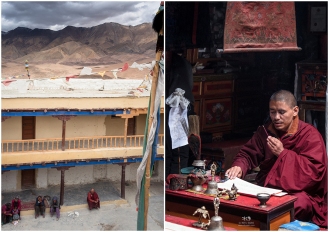 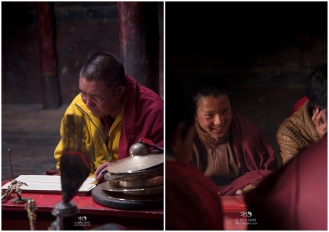 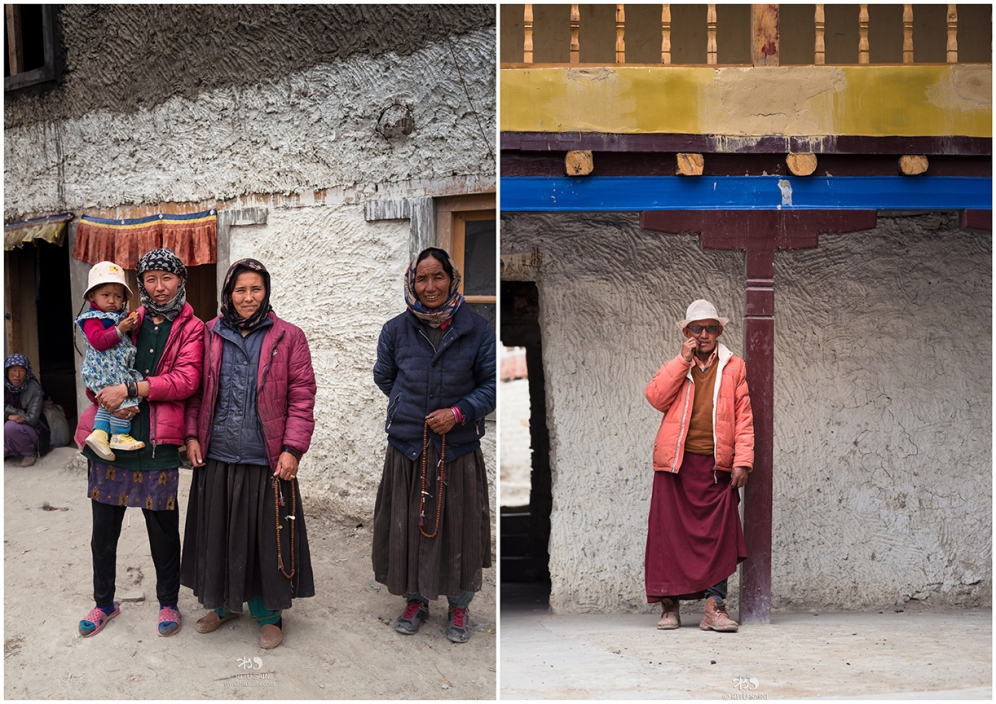 A family we met at the monastery

I felt blessed to have had this opportunity to explore Ladakh riding pillion with plenty of time to gawk on the unbelievably gorgeous landscapes and do photography, it was an adventure of a lifetime, that wouldn’t have been as much fun if it weren’t on a motorbike!

This piece is a part of a series on my travels to Ladakh, other posts –  Ride of a Lifetime, Ladakh Blues: Enchanting lakes of Ladakh, Smiling Faces of Ladakh, Wild Ladakh, Hidden treasure of Ladakh– prehistoric Rock Art that dates back to 3000 BC and Breathless Himalayas: Crossing Chang La pass! Watch wild Kiangs cross the road in front of us and mountain dogs run along our bikes in a short video of our road trip to Changthang shot mostly on the motorbike.